Spring season and the spawn rolls on into April. There have been 3 successful spawns at the hatchery on the lake so far. Even with all of the water and the lake coming up everything seems to be right on time. Water temperatures are approaching 50 degrees and the weather has been pretty normal as of late. Each week seems to have some warm days and some minor weather and a windy day or two. The Truckee River is coming into the lake at an average of around 4000 CFS over the past few weeks and this has helped the lake to come up over three feet this season. It seems to be coming up inches a day right now. Don’t be surprised to see the lake come up another few feet before the season is over.

There are still plenty of beaches closed due to the floods in January and it seems as though we may not see to many more openings this fishing season. The road to Monument has a 10 foot deep and 25 foot wide crevice down the middle of it just north of the Ranch properties and plenty of water still coming out of the mountains through it into the lake. We don’t have much to report on Dago and Howards but with the Truckee running so hard they are probably muddy anyway. The South Nets is a mystery. We were told that the Tribe has the O.K. to allow access even though there is damage to the beach there as well. It is going to be tight and crowded for the next month so if you come to the lake accept the crowds and the lack of access right now.

As far as the fishing goes, it has been a mixed bag. As the water continues to rise in the lake look for conditions to change frequently. Stripping the normal patterns like Midnight Cowboy Wooly Buggers and Martini Olives in tandem with a Bright colored Beetle or Tadpole like chartreuse and white or all white is hard to beat. For Indicator rigs the Albino Wino and the Copper Wino have been the top producing fly for us for the umpteenth year in a row with over thirty 10 pound plus fish caught on these flies in March alone. https://www.pyramidlakeflyfishing.com/product-category/flies/ Fish these flies on the bottom with a Red or Black Maholo Nymph on the top. Early mornings and late evenings are the best time of day, especially during light winds and clear skies. As the water warms up in the mornings it seems to help with a mid-day bite as well. Keep checking your depth on Indicator set ups even on your favorite beaches. You will be surprised how fast the water is changing and rising in the lake. It is going to be tougher to find big fish in the coming month as more and smaller fish show up in the shallows as the spawn continues.

Not to mention the road access is still limited due to snow on the road. Your guess is as good as ours because we have plenty of other places to fish when it is this high. On the same note the flows could stay high like this for a while. Plenty of run off and a dam project on the way at Stampede Reservoir could keep the flows over 500 CFS for a month or more.

As of March 4th 446 heading south is open. This has also allowed more beaches to open up. Tamaracks Beach heading south to Popcorn is now open to fishing. There are still three areas that are closed. Everything to the North of Shot Dog beach including Warrior Point and Monument as well as the South Nets heading south to Washout beach. Also Dago and Howards beaches remain closed. There are some severe gouges in the roads and beaches in these areas due to flooding and we may not see these open this spring.

The lake has slowed down some since the re-opener. There have even been some really tough days. The water is only 44 degrees which is only a degree or two from the normal wintertime low. High Pressure over the past few days has made it tough going. The other important thing to know is the lake has come at least two feet since the beginning of winter and it has made it impossible to wade out to the normal spots near the shelves on almost all of the lake’s more shallow beaches. This spring is going to be way different than in most years when we do not have this huge influx of water in February and March. We had this situation back in 2005 when the lake came up fast in March. There are two possible scenarios that can change the situation on our more shallow beaches. Either we can have a big wind event out of the East or North and the shelves could get reset or we will have to wait until the lake comes up another foot or two with more run-off to bring the fish into the more shallow water. The beaches with a steeper drop off on the South end of the lake are more fishable and the drop offs are easier to get to. Stormy days are going to be important to good fishing this spring as well as low light situations in the early mornings and evenings for sure. Check your depth on your indicator rigs at any of the beaches because they have all changed. Float Tubing and Pontoon Boats are going to play a key role in our spring this year, especially as the water warms up in April. We will try to keep the report up to date as often as possible as situations change at the lake. 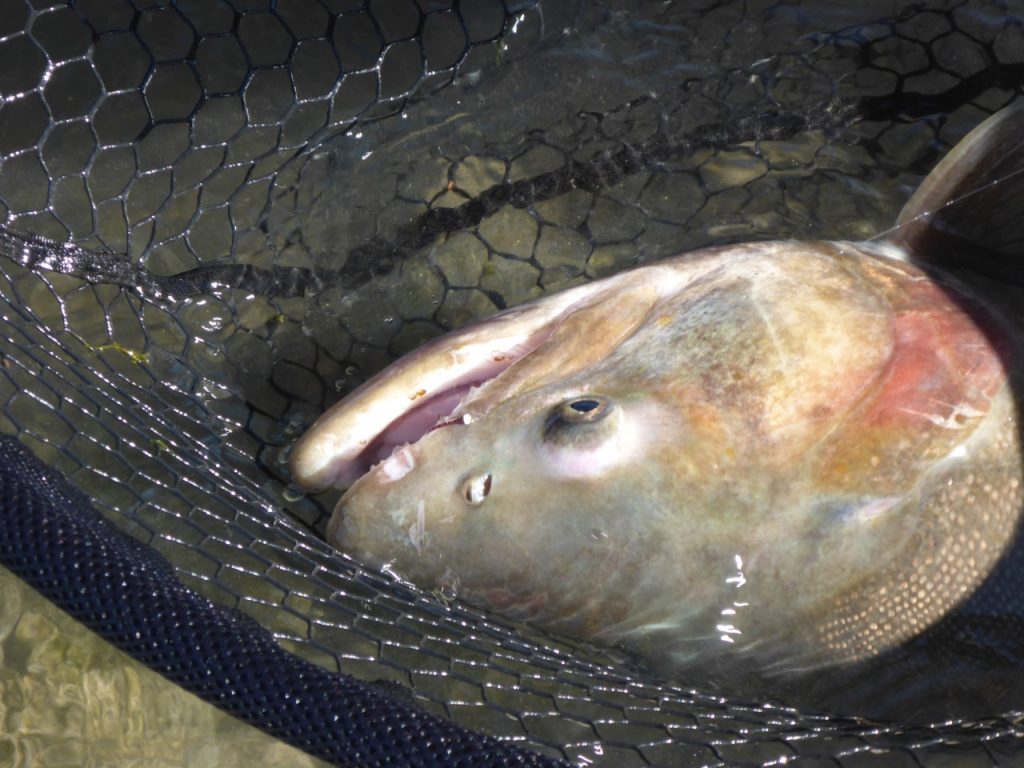